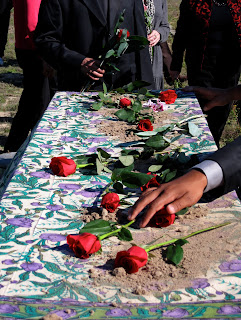 I don't know what to say other then I will miss Diane so very much. In Jan. of 2009 when my partner passed away suddenly Diane had only been home from the Hospital for a short time. She would check in with me almost daily to see if I was okay. Always reminding me that I am not alone. Diane's belief in the Lord was so strong that it was her that kept me from walking away from the Church and God. Whenever I needed the nudge I could and will hear her Voice in my head telling me to Keep praying and trusting in the Lord and it will be okay.

I had just sent Diane a message on Oct. 6 to let her know that I was coming to town. I should have known by the response that she had sent, "As the Lord wills I shall still be on the planet and able to give you a hug" that things had gotten worse.

Diane's passing came as a shock, but not a total surprise of course, as we have followed her blog closely over the years, and received many letters with her unmistakeable sweetly decorated and calligraphed envelopes....and sweet is one of the first words her memory calls up. Another is Friend -she was one of the truest friends anyone could wish for - we felt as close to her after nine years of being separated by two continents as when we first used to hang out together at Findhorn so many (15? 20?) years ago....

She was also the most committed spiritual seeker imaginable - I keep thinking of the line from Brahms' aria How Lovely is Thy Dwelling Place, which goes something like "my soul and body crieth out...for the living God" along with other words about the soul yearning and seeking that make me think so much of Diane.....it seems to me that in these last years of struggle with her illnesses her soul had just simply outgrown her body.....Donald says that what stood out for him was the way she would always first look for - and usually find- the spiritual lesson inherent in her problems... another thing we both immediately thought of was how her very essence came through when she was singing, and we wanted to listen again to that lovely Owl recording Beacon in the Night, with the almost unbearably tender and poignant tone in her voice as she sang Banks of the Dee - Scotland indeed had a real pull on her spirit.....

There is so much more we could say; Diane was such a rare person, and so beloved to us - but this will suffice for now. We will sit and light a candle and listen to Diane singing at the same time as we imagine you will be committing her body to the ground.....and we will imagine her flying away over Loch Ness, where she once took Donald on a flight - only this time we will see her flying with angelic wings.

In Love and Light,

There have been times when my partner and I have tried to join a church, and it's not always easy. At St Paul's Diane was quick to assure me, "Don't worry, I have your back" Thanks Diane. I will miss her calm and assurance.