sometimes the going gets rough 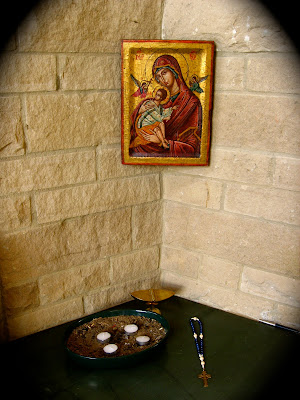 Sometimes when things seem dark, the best one can do is to pray and hang on.
The day after my last post, when my worst complaint was "spaciness" after spending SO much money to get better NOW now NOW!, I went down for the count. A short nap at mid-day, normally unheard of for me, found me in bed in my clothes all afternoon. When I awoke my temperature was 102º. It was Friday and just past 5 pm.
I left messages with both Nurse Judy at Preventive Medical Center of Marin AND with Dan Dunphy at the San Francisco Preventive Medical Group. Some prevention - I was feeling horrible! And it was the weekend witching hour where most conventional medical practices make sure you encounter a generic voicemail that says, "We are closed for the weekend. If this is a medical emergency, please hang up and dial 9-1-1 now." This was not something I wanted to do.
So I began to say Evening Prayer, and fell into a tar pit of mixed emotions reading Psalm 92, with such lines as, "For you have made me glad by your acts, O LORD; and I shout for joy because of the works of your hands." I read that in fear, even resentment. Just earlier in the day I'd made a perfunctory slog through a dreadfully oppressive Psalm 88: "O LORD, my God, my Savior, by day and night I cry to you. Let my prayer enter into your presence; incline your ear to my lamentation. For I am full of trouble; my life is at the brink of the grave." I'd read that when I was still feeling hopeful. "I should have switched the Daily Offices," I moaned to myself. I felt ill, confused, abandoned.
And then the phone rang.
Judy was the first to call me after hours. She then phoned in a prescription for Erythromycin at a local drug store, saying, "I don't like you having a fever with your white blood counts." I told her I'd left a message with Dan and she said, "So did I, but I don't know if he'll call back."
He did. And he said, "When my German or Swiss patients would experience the symptoms you're describing to me after a treatment, they'd phone me up and thank me!" I was waiting to hear something sensible in the next sentence. "Have you heard of the Herxheimer Effect? You had an infection when you came into my office; you got an oxidative therapy which kills off bacteria and virus... it has stimulated your immune system. I think you're having a die-off reaction. And I would agree with Judy that if the fever continues after tomorrow, go on something for respiratory infection. That could be a sign of pneumonia. We have to observe closely and stay in communication here."
I live alone and felt completely looked after.... by God and by these kind healing practitioners who both gave me their cell phone numbers for the weekend.
By Saturday morning the fever had broken. The general illness symptoms remain but they are slowly exiting my body as I pile on extra ImmPower, Vitamin D3 and beta-carotene amidst my normal handfuls of supplements. I've even made a few Green Smoothies for the first time ever! Go chlorophyll!
When I had oncologists hovering over me, I would be told in no uncertain terms how dangerous it would be for me to catch a cold or flu. Vague but treacherous risks of everything from pneumonia to sepsis were trotted out. Dangers need to be acknowledged but living in such a fear-based mindset has its own deleterious effects. I have an antibiotic waiting for me at the drug store and people who will return my calls with real options.
I also have a God who listens even when I'm moaning, hurting and feeling lost.
I drove to the early service at St. Paul's yesterday to take Communion. I needed my holy medicine of Christ's Presence in the wafer and the cup. It's not only the herbs that sustain me.
Posted by Diane at 9:34 AM 3 comments:

Labels: don't give up

Jesus and Rorschach in the same candle 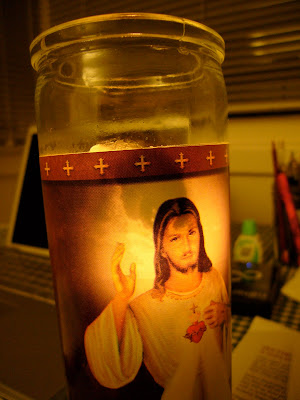 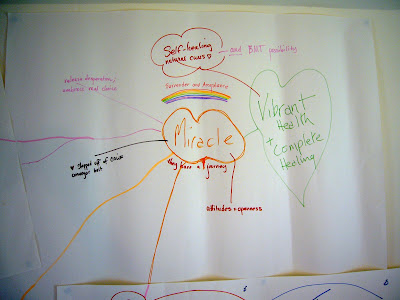 I revisited the photos of our Mind Maps from early last summer in Scotland. I wanted to write about this.... this MIRACLE.
I'm here sitting at my new desk (you'd love it) in my lovely new home in Novato, California, the rain dripping outside as the day meanders towards evening. When Tony, Ali, Ruthie and I sat down in the living room at Fisherman's Bothies and prayerfully created a series of Mind Maps late last June, welcoming a "Miracle" was Ali's idea (go Ali!). Clear and bright enclosed in a heart is "Vibrant Health and Complete Healing."
It was so remote a concept when we uncovered its possibility. I felt as though I was split at least in two, with a part of my mind saying, "Well (ahem) of COURSE a miracle is possible, and I love Jesus and He loves me and.... well, heck fire, why not?" And another part was still bruised from blood draws and bone marrow biopsies, with British oncologists crowding around me (I met with three while there!) and for the most part making sure I understood that I was either "a bad girl" for "not completing my course of treatment" or "a ticking bomb." These were not cheery messages, although in the presence of my treasured friends there, I was held amidst the worries. I would've been challenged to have hand-picked more embracing support. I love you guys!!
As I wrote awhile back, the Mind Map session opened up my options when the possibility of pursuing conventional cancer treatment in Scotland clattered to a halt. You may or may not remember that when I left the Bay Area in April of last year, I didn't really know what would happen next after landing in the bonnie Highlands with Tony & Ali & Co. Returning to California - and to the Bay Area! - would've made me shake my head.
I am now back and happier than I have been in years.
So what's a miracle for me today? Having caught my 1st cold of the winter and sipping hot herbal teas with honey without lunging at the nearest thermometer while shuddering in fear. Miracles plural for me dance in the blessed ordinariness of my life now, from not stressing too much about rebuilding my business with investing to realizing that if I sound like a froggy at choir practice tonight, at least I will have shown up for a hug-free attempt at perfecting our anthem for Sunday. A miracle smiles amidst my gratitude when I kanoodle about making organic vegan and frequently raw cuisine in a real kitchen - you know, one I can move around in! Not a shack in Berkeley where I felt the walls closing in on more levels than one, but in a darling 1940's house that I am slowly kitting out thanks to prayerful shopping. (Craigslist and consignment are two of my favorite words).
I wrote "Self healing [and] natural cures" at the top of that Miracle page. It was a mere hope at the time. I had just begun gingerly adding in grapeseed extract and aloe vera by day to my nightly Essiac Tea while reading Ty Bollinger's Cancer - Step Outside the Box. You should see the fistfuls of healing supplements I take now! My leaning INTO holistic healing modalities and stepping away from the "slash, poison and burn" mentality of most conventional cancer protocols were only just beginning. I didn't awaken one morning and say, "Fie on oncologists! To hell with you and your archaic methods of slowly killing your patients!" I don't believe a single oncologist or hematologist I worked with had a malevolent bone (!) in their being. Their underlying nice wasn't healing me, however.
"Let food be thy medicine, and medicine be thy food" wrote Hippocrates over 2500 years ago! And you know, he wasn't talking about Big Mac's, Twinkies or even some massively sugared Frappucino num-num.
I've shared with friends that if the allopathic world had been able to give me a guarantee, I might've been more of a mind to continue along with their guidelines. They can't. My prognosis is wretched even getting a bone marrow transplant, and that doesn't address quality of life. I was freed by their inability to say, "We WILL cure you!" I am freed as I turn to my One Lord and Savior, who promises me life eternal no matter how long I have on earth.
Let's get real - I'm not going to schlepp around in this body forever. But early 50's did seem a bit premature. Do I want to live vibrantly, happily, healthfully and in service for another say 30-40 years? Yeah! Will God have abandoned me if I don't? I think not. I not only have today, I am ENJOYING today. This is not a manic high or some delusional whistling in the dark. Without focusing too ardently on the possibility, everything could shift in the twinkling of an eye. My opportunity today is not to cringe from that but to walk lightly between the two worlds, fully present plus desiring more as well as fully present while accepting death before I have decided it's my "time."
"Surrender and Acceptance," I wrote while we all sat together in their living room. That is a part of my Miracle along with honest gratitude, feeling God's Grace, savoring another breath and continued natural healing.
Sometimes I feel as though I have crossed over from another realm.
Where I am today is a wonderful place.
Posted by Diane at 6:41 PM 3 comments: